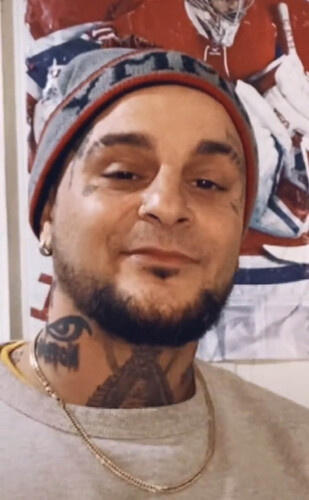 It is with heavy hearts that we the family announce the unexpected passing of Mitchell “Caps” Haché which occurred on Tuesday, January 4th, 2022 at the age of 35.

Mitchell grew up in Montreal and moved to Bathurst in 2006, in 2012 he met the love of his life Danielle Bruce who he called “Nielle”. They found happiness in life with each other. He was an amazing father. Every night he would tell his son Enzo he loved him to infinity and beyond. Mitchell was a genuine person who brought the best out of people and had the most contagious smile. Tattoos were a passion of Mitch’s, having dozens of them from head to toe. He shared his joy of life through his many “TikTok” videos. He will be missed by so many.

Besides his wife of Bathurst, he leaves behind his parents: Bruno Boudreau of Montreal and Simonne Haché of Bathurst.

His sister Layla Boudreau and brother Maxime Boudreau both of Montreal.

His best friend whom he considered a brother and Enzo’s Godfather, Lowcko Riva of Montreal.

His grandparents Elva and Raoul Boudreau of Montreal.

Special uncle, Renauld Haché of Bathurst as well as many other aunts, uncles and cousins.

He is also survived by his in-laws: Audrey Gautreau and Allen Bruce both of Ontario.

The family will receive relatives and friends at Elhatton’s Funeral Home (www.elhatton.com), Bathurst on Tuesday January 11th, 2022 from 2 to 4 p.m. and 7 to 9 p.m. Masks, proof of double vaccination and a government issued ID will be required. There will be no funeral service.

Donations in memory of Mitchell may be made to the family.