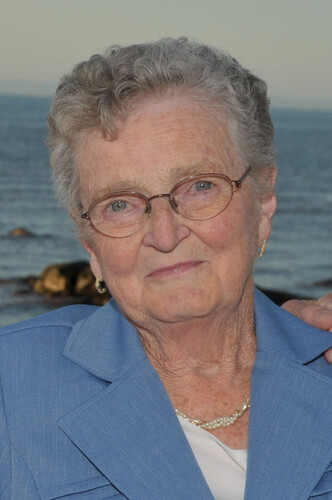 The death of Mrs. Alice P. Jagoe, wife of 75 years to the late Cleveland A. Jagoe of Bathurst, NB which occurred on Friday December 3, 2021, at the Chaleur Regional Hospital at the age of 95 years.

Born in Stonehaven, NB, she was the daughter of the late Eldon and Margaret L. (Payne) Scott.

She is also survived by one brother, Dave Scott of Bathurst.

Alice enjoyed spending summers at the family cottage in Salmon Beach especially the potlucks. She was known for her doughnuts, fat molasses & oatmeal fudge filled cookies, and Christmas t-ring was a family favorite. Alice was the heart of the Jagoe home which always had an open door to those in need, especially those from Downshore who couldn’t get home due to winter weather. She enjoyed travelling across Canada visiting family who lived coast to coast. Alice & Cleve’s Alaskan cruise and European tour of the 50th anniversary of Holland’s liberation where particular highlights.

Alice was knowingly quiet in demeanor but had a sharp wit and tongue. Cleve referred to Alice for approval for most things calling her The Senate.

Special thank you to the staff of angels at Southern Comfort Villa for their exceptional care over the past two years; and the staff on 4 East and Palliative Care at Chaleur Regional Hospital.

The family will receive relatives and friends on Monday from 2 to 4 p.m. only at Elhatton’s Funeral Home (www.elhatton.com), Bathurst. Due to restrictions, a Celebration of Life will be held by invitation only from the First United Church, Bathurst on Tuesday December 7, 2021, at 2 p.m. Proof of vaccinations and a valid ID are required.

Donations in memory of Alice can be made to First United Church (Bathurst), Luxor Shriners Transportation Fund or charity of Donor’s choice.