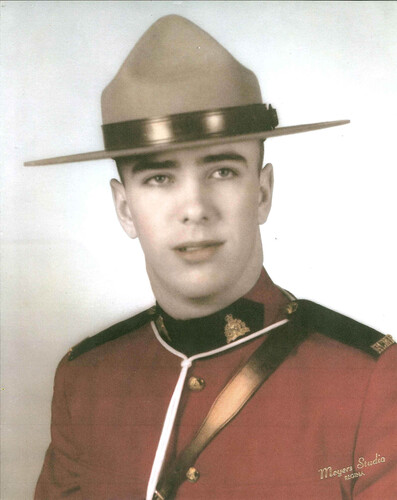 Lloyd H. Armstrong of Bathurst, NB passed away peacefully at home at the age of 78, surrounded by the love of family and friends.

He was born to parents of the late Thomas and Brigitte (Donnelly) Armstrong in Fort Coulonge, Quebec. After losing his mother at the age of 6 months, he was raised by his uncle Clifford and Aunt Katherine (Armstrong) Robinson in a loving home in Waltham Quebec. He was known as Squire growing up and loved the beautiful Ottawa Valley.

Lloyd is survived by the love of his life, wife Cheryl (Cherrie Williston) whom he happily wed 56 years ago this September. He is also survived by his son Daniel (Paula) Armstrong of Saint John, NB, his daughter Gwen (Troy) Hierlihy of Miramichi, NB and daughter Tanya Armstrong of Fredericton, NB. Those who knew Lloyd would wholeheartedly agree that his family was his proudest accomplishment. He found great joy in sharing many of his passions such as hockey games, trips to the market, policing, music, a hardy meal along with fishing and hunting in the great outdoors. He continuously spread his wisdom, humor and crooked grin forever gently teasing his beautiful grandkids; Jeremy (Kelsey), Mackenzie, Cameron, Cory, Josh (Ashley), Jonathan (Jennifer), Daniel, Hannah, Jada and Megan.

He will be sadly missed by surviving sister, Iva James and brother, Courtney Robinson (Esther) and brother in law Merold Vosseler along with many nieces and nephews. He was predeceased by his Armstrong brothers; Roy, Jimmy, Allan and William as well as his Robinson sister, Erma and brother in law, Homer James. Lloyd joined the Royal Canadian Mounted Police at 19 years old. He was a proud, passionate and highly respected Mountie until his retirement in 1988. He continued his career as Chief of Police of the Bathurst Police Department, a post he held for 13 years. He was an active member and past treasurer of St George’s Anglican Church and a proud member of the New Brunswick RCMP Veterans Association and many other organization too numerous to name.

He enjoyed all of his longtime friendships made throughout his career and lifetime. He valued each and every one dearly.

The family wishes to express sincere thanks to Dr. Marilene Hache and the wonderful care of the Extra Mural Program. Especially nurse Suzanne and respiratory therapist Nathalie.

The funeral service will be celebrated on Monday, Oct 18, 2021 at 2:00 pm at St George’s Anglican Church in Bathurst, NB. Mask and proof of double vaccination are required. In lieu of flowers, donations in Lloyd’s memory may be made to Saint George's Anglican Church, Cystic Fibrosis Canada or to a charity of the donor’s choice.